This has been going on for too long

This article might be from 1996 but a lot of the things in this article are still relevant today.

Ching Hai also teaches what she calls the Convenient Method--a sort of Quan Yin Lite for new initiates--which requires meditating only half an hour per day, and eating vegetarian for 10 days per month. "When children are 6 years old, if they are with initiated parents, they can be half-initiated," Ching Hai rather arbitrarily mandates. "When they are 12, if they have parents who also practice, they can be initiated fully."

Though Ching Hai may not pose any physical threat to her followers, she may nevertheless be doing them other forms of damage. "It was mostly just the money, and the breaking up of the family," Singer says of her callers' laments. "That's what was causing the greatest pain. Telling the spouse that if they don't join Ching Hai, they would have to leave them."

Loving Hut is owned by Supreme Master Ching Hai and her cult. Please do not eat there.

The individual restaurants are owned by individual people but in order to open up a Loving Hut under that name and brand the restaurant owners are forced to buy Ching Hai's logo design, food, furnishing and whatever else they might need. All of the money spent for opening up a Loving Hut goes directly to Chin Hai. If the owners are not directly paying her then they are indirectly paying her by continuing to buy into her cult and waste their time within the cult.

If you are a vegan or even if you just enjoy vegan food every now and then, please do not eat at a Loving Hut any more. We must not feed Ching Hai any more.

Not ever cult is easy to spot. Not every cult is a group of people living in tents in the middle of nowhere. This is a cult and Supreme master Ching Hai is the leader. Stop letting this woman get away with stealing people's money and ruining lives.
at 2:20 PM 12 comments:

A little dated but still an interesting read.

It's the End of the World as We Know It, and I Feel Fine

Ching Hai was one of many so called spiritual leaders/religious leaders who claimed that the world was going to end on December 21, 2012. I am writing this blog in 2013 so we know that is not true. Do you know why we all did not die according to Ching Hai?

Because of her followers. So many people had become vegan and followed her method that it gave her (God) enough energy to save the world.

She just put it all back on her followers meaning that now members of the cult have a false feeling that they did something huge and great for the world. But the world was never going to be destroyed and no one was going to die on December 21st. She just made her cult followers feel as if buying all of her crap and doing everything she says made a huge difference in the world thus ensuring that they will continue to buy all f her crap and follower her regardless of what she says.
at 12:57 AM 13 comments:

AN ELDERLY man who lost his wife to a religious cult has pleaded with the Woodland Trust not to take money from the group.
Henry Iban said he was “dismayed and saddened” that Coed Cadw (the Woodland Trust in Wales) accepted £100,000 from spiritual teacher Supreme Master Ching Hai. The money is to be used to buy and restore Cwm Mynach, a 1,000-acre valley near Dolgellau.
Coed Cadw, which has defended the gift, hopes to complete the deal in the next few days.
Mr Iban – not his real name – said the money had been donated to “buy credibility” for Ching Hai. He urged Coed Cadw to return the money, as President Clinton and the US Red Cross did with similar donations when they learned more about the organisation.

In a letter to the Trust, he wrote: “I recognise fully that you need funds for the Welsh project.


“But those of us who have had the lives of our families severely and irreversibly damaged by this cult, believe that such donations are in effect blood money.”


Mr Iban refuses to use his real name. A retired senior professional in London, he said his wife, an academic, became embroiled with the cult 12 years ago.

After her behaviour and spending became erratic, they divorced, leaving Mr Iban to fend for his 10-year-old son.
“She would disappear at a moment’s notice when the Supreme Master called, once on Christmas Eve,” he said. “Often it was for months at a time – we didn’t even know what continent she was on.
“It put a drain on the family. She had a well-paid job, which she lost, and she started buying the cult’s jewellery at £7,000-£8,000-per-item.
“I tried to accommodate her but it was difficult – in the end I filed for divorce to protect the family finances.”
His wife was always interested in Eastern mysticism and she fell into the cult’s clutches at a spiritualist fair in London.
At first Mr Iban failed to recognise the dangers and indulged her new passion. But when he researched the group, he found the world’s fastest growing cult was alarming cult watchers.
As well as being a painter, poet and Buddhist nun, Vietnamese-born Ching Hai is a fashion designer and beauty makeover consultant.
Her group promotes vegetarianism and claims to support tree planting and efforts to curb climate change.
In the US, however, Ching Hai was criticised after causing $1m damage to a mangrove plantation in a national park.
The Woodland Trust needed to raise £850,000 to buy pine-clad Cwm Mynach and restore it to native woodland.
In return for its donation, Ching Hai said it wanted to make a film about the group’s trip to Wales, to be shown on its own 24-hour satellite TV station (Sky channel 835).
Coed Cadw spokesman Rory Francis defended the gift. In response to Mr Iban’s letter, he said: “Could I reassure you the Woodland Trust has procedures to rigorously check out all high value donations against key criteria pertaining to legality and Trust policy.”
Mr Francis said the Trust always investigated corporate donors to safeguard its reputation. It found nothing untoward about Ching Hai, neither did the group request publicity.
Mr Iban is undeterred. He alleged Ching Hai had not only broken up his marriage, it had extracted “very large sums of money” from his family which was now being used to finance projects like Cym Mynach.
Followers say much of the money Ching Hai makes is used for helping the poor, refugees and victims of environmental disasters.
Spokesman Zamir Elahi said: “Membership is entirely voluntary – there is no joining fee and no donations are expected. People join through free will.
“The Supreme Master makes money by selling products, like any other businesperson, and redistributes everything to good causes around the world.”

Help us stop this cult disguised as a peace loving, vegan community. If you have a story about the Supreme Master Ching Hai cult that you want to share, please email us at Judithvis392@yahoo.com
This cult fools thousands of people each year by talking of love and peace but all MASTER Ching Hai really wants is for you to buy her jewelry and eat at her restaurant Loving Hut. 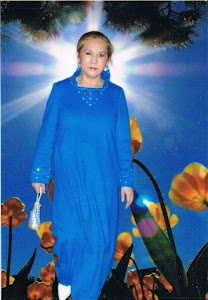 Bitch Thinks She is God